Post discussion here about the hardest minigame in OSRS, the Fight Cave! How was your experience with it? Do you need advice? Do you have advice for others, perhaps?

The Fight Cave is one of the most fascinating challenges in not just Runescape, but in all of gaming. The waves get linearly harder as one progresses, except for the final wave, which is 100 times harder than the one before it. Tztok-Jad is not difficult because of any video game skill requirement; he is hard to kill because there's no great way to practice for it, and because extreme tension will sink into even the bravest adventurers who get to Big 63. Personally, I think the Fire Cape makes the top 5 list of best items to own, even if one counts extremely expansive items like 3rd age stuff. Some grind-oriented players never attempt it, some ragequit while trying to get one and give up. But those who do get it, and are smart enough not to risk & die with it, will forever have a changed perspective on wealth. This is because it doesn't matter how much money one spends attempting the Fight Cave, or how long it takes to get one. But what matters is simply whether or not one has one. Most people feel devastated if they fail one or a few attempts, and they may feel like it isn't as worth it to get the cape for financial reasons. But let me tell you guys one thing: If you get a fire cape, you won't care how long it took. It's a priceless item that doesn't follow the same rules of time efficiency and effort of obtaintion that other items follow. You get one, and you're set for life. The most important skill in getting one isn't being perfect at prayer point efficiency, or even prayer switching. The most important skill in getting a fire cape is the ability to try again after failure. Someone who is skilled enough at the Fight Cave to have a 40% chance of success, but with very little patience will likely lose a couple times, then rage quit from the minigame for a year plus. But one skilled enough for a 20% shot at a cape who is determined to keep trying no matter what, will end up getting one; it'd be mathematically almost impossible for them not to. I believe that everyone with good enough stats who tries their hardest in preparation and execution...is skilled enough to have at least a 1/3 shot at a cape. Don't think that failing more times before getting a cape somehow devalues the achievement. When someone wants to know if you can drive them somewhere, they ask if you have a driver's license. They don't ask "Do you have a driver's license, and how many times did it take you do pass the test?" Personally, I think failing Jad more times before a cape makes one even cooler than someone who got it on their first try. If one beats the Fight Cave on their first try, then it shows that their good at a game. If one beats the Fight Cave after failing 5 times however, then it shows something about their character; they are willing to fight through any obstacle to achieve greatness.

My Fight Cave story:
In the end of pre-EOC, as EOC Beta was coming out and the combat system was soon to change the game forever, my one goal was to get a fire cape before EOC ruined the achievement. It took me ages to get through the caves on both of my serious attempts (about 5 hours), which increased the stakes of winning. The first attempt saw me dieing early on, and wasn't really noteworthy. In the second attempt, I got to the healers, but couldn't see Jad's health bar. I lured the healers, but for some reason, Jad wasn't dieing even though I was hitting him for a few minutes. Eventually, time went on long enough for the 5% chance I had of messing up a prayer to come true and kill me. This was the last straw for me, as EOC was coming out which I knew I might quit from anyways. I gave up on Jad and RS, thinking that forever I would never get a cape, because I saw no joy in going through the Fight Cave with the wonky RS3 mechanics; doing the Fight Cave in RS3 just wouldn't be the same legendary challenge. But then, OSRS came out, and with it the old Fight Cave. After two and a half years, my account was finally strong enough for me to attempt it again. This time, I got 80 range in preparation, though the 360 magers still proved very time consuming to get through. On the Jad fight, I thought for sure I'd be calm, but that inevitable marathon runner heartbeat kicked in. I messed up prayers a couple times early on, but the roulette of Jad hits didn't KO me. As I was luring the healers, my mind was maxing out, as it wasn't used to the pressure that comes with having to focus with this level of intensity. Even though I'm a hardcore SSBM player (one of the hardest games in the world to play competitively), Wave 63's requirement of 100% continuous focus is tough on me. SSBM (Super Smash Bros. Melee) at the competitive level is so fast and beyond human reflexes that most players can't give 100% of their focus through a whole game. Like boxing, one can afford to lose focus for a bit if they string together some combos in a streak of focus that powers one to victory. But the contrary continuous focus required in the Jad fight would get to me as I tried to lure the final healer. While one healer away from the "home stretch", my mind got tired of the constant focus, and naturally let up for a moment to take a breath, so to speak. Of course Jad's meteor hit a 90 on me, and I died. Though I am very thankful for the result of this attempt, because I came close to dieing several times before Jad, and if I had died any of those times, I would not have gotten very crucial Jad experience. Now the smart thing I did on this attempt was to do it in the morning on a day off. I had the whole rest of the day to go to the store IRL, relax, and form a game plan for not just the next attempt, but for the eventual attaining of a fire cape. My plan was not to go all-in with my expectations in attempt #2, but instead focus on forming a desire to keep trying again if I lose. I figured I had about a 1/3 chance of beating the caves with each attempt. I promised myself that I wouldn't be too disappointed with a loss if I got more crucial experience. The next morning on October 6th, 2015, I progressed through the caves again, and at first it felt nice and casual. I was progressing a lot smoother, and only had about 1 moment in waves 1-62 where i could have died. It didn't take long to figure out that not going all-in with expectations on a Fight Cave attempt is easier said than done; as soon as one realizes "Wow, it's taking a while to get through these waves, and if I lose, I have to do this all over"... as soon as one realizes that, it's very difficult not to go all-in with expectations and be extremely disappointed with a loss. Near the end of a run that was very time consuming, largely due to me doing Guthan's healing antics like flinching the 180s, I was on Wave 61, the last wave where one can trap a monster to take a break. While my character Shaby15 stared at the 180 he had trapped behind the Italy Rock, I did the only thing I know how to do to prepare for Jad: I opened up a screenshot I took of the prayer book in MS Paint, and shrinked the Paint window so that it only showed the book. Then, I found a video of someone killing Jad with sound, and put the screenshot over the prayer book in the video. I clicked the prayers as I watched the video. Pic of what I mean: 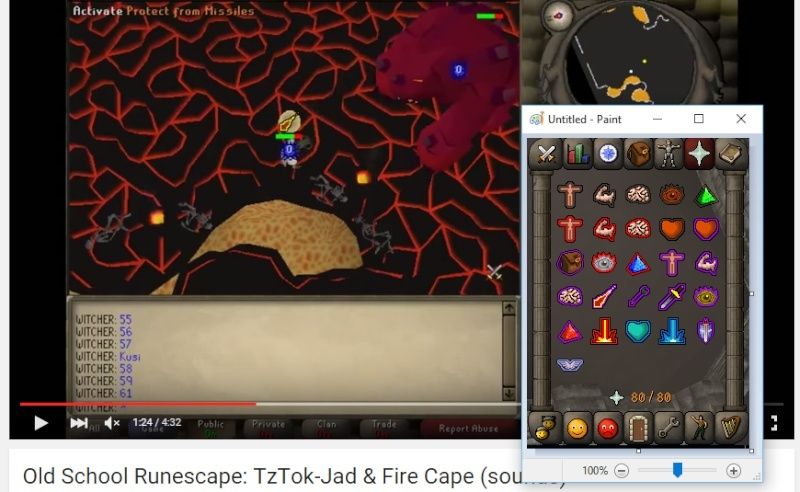 On another Fight Cave topic, I heard that Jagex had the idea of extending the caves with more waves? Not sure if this is a rumor, but it's very interesting anyways. What would they do for Wave 64? Jad and a lvl 22? Then Jad and two lvl 22s, then Jad and a lvl 45? To have this much Jad, I think that Jad probably shouldn't have healers on waves after 63, except maybe for special waves later on. Though it would be epic to see pros deal with both healers and other monsters. There's a few design obstacles to avoid impossibility of getting further, such as running out of even max efficiency supplies, and how you'd die for sure against Jad and a lvl 360.

"On another Fight Cave topic, I heard that Jagex had the idea of extending the caves with more waves? Not sure if this is a rumor, but it's very interesting anyways. What would they do for Wave 64?"

There are gonna be waves with more than one jad. Also they are adding a new, "Stronger jad" so a jad 2.0 so to speak.
The cape will be bis, but they haven't decided if it will be a magic, range or melee cape.
It will be very hard. They said they don't think anyone will get it the first month of release. (Just watch the runefest presentation to hear about it, and some other cool stuff)